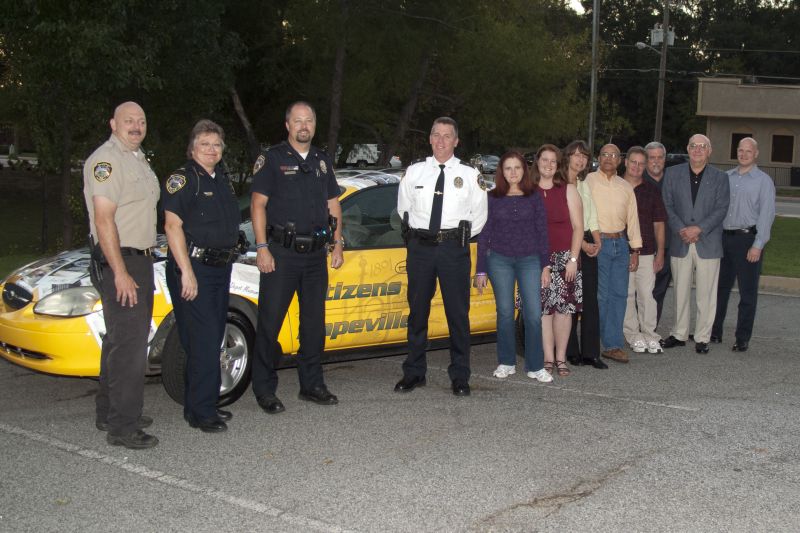 Police organizations throughout the United States are presenting citizen police academy programs as a means of improving police-community relations. The Citizen Police Academy is designed to provide Hapeville residents, business owners and other city employees with basic information about the police profession and the daily operations of the Hapeville Police Department.

The ultimate objective is to establish and maintain positive communications and develop a partnership between the community and the police department through training and education. The Citizen Police Academy is a ten-week course and runs once a year. The academy is free of charge. Applicants must be at least 18 years of age and a resident, business owner or employee of Hapeville.

If you are interested in applying for the Citizen's Police Academy, applications and information packets may be obtained at the Hapeville Police Department. More information is available by calling Lt. Mark Bradberry at 404 669-2161.

Thank you for your interest in the City of Hapeville Police Department, and the betterment of the community.

From the desk of Chief Glavosek: One day while patrolling the city, I noticed that none of the children were wearing their bicycle helmets and we had been experiencing some issues throughout the city, with minor delinquency. This made me feel an obligation to help the situation by putting together a program that educates children on how to be safe and responsible citizens. I recalled a time when I was about 6 years old and attended a program called Safety Town. It was a mock city street with a police officer directing traffic. It had peddle cars and tricycles and it gave each participant the opportunity to interact with the officer and learn how to properly navigate the street safely. It was a wonderful experience. It was an experience that I remember nearly forty years later.

With my experience ingrained in my mind, I called in one of our officers Michael Sanders and explained the concept to him and asked him if he would be my project manager. He accepted the challenge and explained that he had never heard of such a thing and that he would have to do some research to maintain the vision. He did a lot of research, we put together a committee consisting of other city department employees and then he started to develop his plan. With the help of many the concept came together and not only met my expectation but, far exceeded it. Our program we now call SafetyVille was a great success. So much so, that some of the children cried on the last day at the thought of it being over.

The first program started on June 6th, 2011 and ran through June 10th. It is an interactive, scenario based program for children ages 4 to 8. It has a miniature city block with a working Rail Road intersection, intersections with stop signs, sidewalks, crosswalks and a working traffic light. The program is intended to teach children the proper way to use the 911 emergency number, water safety and how to react if they are caught in a fire. In the first program, the Fire Department brought in a smokehouse to teach children proper ways to prevent fires and if they find themselves in a fire, how to get out. Finally, it teaches children that Police Officers and Firemen are approachable and people that they can trust.